From the onset, Shawnna and Sandro, a Southern California couple immersed in the contemporary art scene, had a clear vision for their grand affair. With an eye for detail, beauty and immaculate design, they knew instantly that the Four Seasons Biltmore was the ultimate wedding venue. “It was incredibly romantic and charming with fairytale potential,” says the bride. Along with Four Seasons site-coordinator Akiko Suzuki, Shawnna enlisted the expertise of Beverly Hills’ famed event designer Mindy Weiss to arrange the fine details of the day. “I’m a do-it-yourself kind of person but working with Mindy added a level of confidence that assured us everything was going to be wonderful,” Shawnna says.

The design of the wedding was built around the breathtaking floral creations of Jeff Leatham, Artistic Director of the Four Seasons Hotel George V in Paris, France. Since 1999, Leatham has lovingly dressed the grande dame of avenue George V in an abundance of fresh blooms in his signature bold designs. “Sandro travels to Paris with his family often and his parents are loyal guests of the Four Seasons,” Shawnna says. Over time, they developed a kinship with the florist, even commissioning him to decorate family birthday parties through the years. During the couple’s venue walk-through in Santa Barbara with their wedding coordinator, the mother-of-the-groom presented Shawnna with the ultimate surprise. “As my fiancé and I entered the ballroom, we heard ‘Did somebody ask for Jeff Leatham?’,” the bride recalls. “I turned to see Jeff, smiling big and holding a bloom in his hand! I was completely awestruck.”

Jeff and his team worked tirelessly throughout the day staging multiple designs to help the couple envision their big event. Sandro and Shawnna then traveled to Paris in the months leading up to their wedding for a final design meeting. “Jeff has a way of tapping into his creativity on the spot,” Shawnna says. She simply asked him, “If you had a chance to do something fabulous, what would you do?” Jeff’s magnificent floral execution is part experience, part instinct, but, most of all, art. Bringing his own flair to the luxury beach hotel, Jeff mesmerized the party-goers with his fantastical floral displays. A historic fig tree was dressed in lush green and white flower garlands with a vintage yellow birdcage hanging from one branch. A natural grass aisle was lined in 5,000 white long- stem roses leading to a custom Plexiglas wedding arch draped in 15,000 white orchids. “My husband’s family is very contemporary,” Shawnna says. “Since we own a modern art gallery, we were thrilled to see the clear mirage chairs and use of Plexiglas at the ceremony site.”

Elegant invitations by Urbanic Paper Boutique announced the September 11, 2011 seaside nuptials. The groom, a former graphic designer, custom designed the stationery which featured two lovebirds perched on a fig tree branch. The whimsical wedding motif was found throughout the décor from the hand-painted bars designed by Revelry to the projected light imagery on the ballroom wall by Peterson Lighting. Early-arriving friends and family were welcomed with gift baskets filled to the brim with iconic Southern California goodies: Santa Barbara pistachios, locally- made salsa, freshly baked cookies and a champagne bottle magnet. On the eve before the wedding, a festive rehearsal dinner in the Four Seasons Escala Garden paid tribute to the groom’s German heritage. Sandro arrived wearing a traditional lederhosen while his bride-to-be donned a German dirndl. A Swiss-European theme prevailed beneath a stunning canopy of purple hydrangeas in the outdoor courtyard. While diners feasted on a four-course contemporary Swiss meal, they were treated to a film captured by the couple during their summer holiday in Switzerland’s countryside. “We wanted everyone to feel as if they were driving down those country roads with us,” Shawnna says.

The wedding celebration began in earnest as guests were led to the Monte Vista Lawn. The bride appeared in a stunning Enzoani gown paired with Christian Louboutin silver peep-toe pumps. The groom painted an American flag on Shawnna’s red leather soles in remembrance of the lives lost on the fateful day of September 11.

Sandro was a handsome groom in a Gucci tuxedo and Giorgio Armani shoes. In a heartfelt ceremony, Sandro presented his blushing bride with a gorgeous cushion-cut diamond ring, custom-designed with Santa Monica jeweler Rafinity Inc. “My husband paid attention for the past seven and a half years of our relationship!” Shawnna jokes. “If I had designed it, I wouldn’t have done it nearly as well as he did.” The bride sparkled in Rafinity’s 6-carat yellow and white diamond chandelier earrings and a right-hand 6-carat yellow diamond ring. In a sign of gratitude, Shawnna gifted her bridesmaids with lemon quartz stud earrings, while Sandro’s groomsmen received leather dopp kits and Hofbräuhaus beer steins from Munich, Germany.

"Our wedding day was, in a word, lavish,” says the bride. “It was modern, elegant and boundless.” The sweethearts wished to keep the emotions strong with an intimate guest list of 140 attendees. The Motown soul quartet Side Effect played an a capella rendition of “My Girl” as guests made their way to The Oceanside Terrace for cocktail hour. A modern lounge setting prevailed with bundles of crisp white and bold orange calla lilies in 6-foot clear vases. The pair adhered to a fresh palette of lemon yellow and silvery grey in La Pacifica Ballroom for the reception. Elegant tables were dressed in grey rosette linens by Nuage Designs with monochromatic yellow centerpieces of mini calla lilies, orchids and roses. The bridal table stood out with modern all-white floral arrangements. Lehr and Black Invitationers designed the escort cards, a diagram of the ballroom enclosed. In lieu of a traditional guest book, the groom hand-painted branches on canvas and celebrants were invited to leave their thumbprint to symbolize a leaf on a tree. While dinner was served, florist Jeff Leatham transformed the Oceanside Terrace, adding fuchsia flowers to the space along with magenta throw pillows and dramatic mood lighting. “Jeff kept every stage of the day progressing beautifully with his designs,” Shawnna says. “When the guests began trickling outside after dinner, it was a big shock to see the swanky, crisp look of the Terrace!”

Party-goers mingled beneath the moonlight then took to the dance floor for the lively sounds of The Cowling band. “Dancing with our family and friends was the highlight for us,” says the bride. “It’s hard to say when the party reached its peak because the whole day just kept getting better and better.” A candy-laden dessert table dressed in magenta linens and calla lilies satisfied the guests’ sweet tooth, capped by a fun crepe station. “Sandro and I are both really creative, opinionated people but our wedding cake was the one thing that we couldn’t nail-down a vision for,” Shawnna says. “We met with the girls from Cupcakes Couture of Manhattan Beach in Mindy’s office and they presented us with the most delicious flavors using all fresh fruit.” The couple decided on the first sketch— a cascading polka dot almond cake with salted caramel frosting alternated with red velvet cake with a fresh raspberry filling and cream cheese frosting.

“What we envisioned for our day was far exceeded thanks to the vision of Jeff Leatham and a talented team of designers” says the bride. “Everything came together beautifully. Celebrating with our closest friends and family surrounding us was more than we could have ever imagined!" 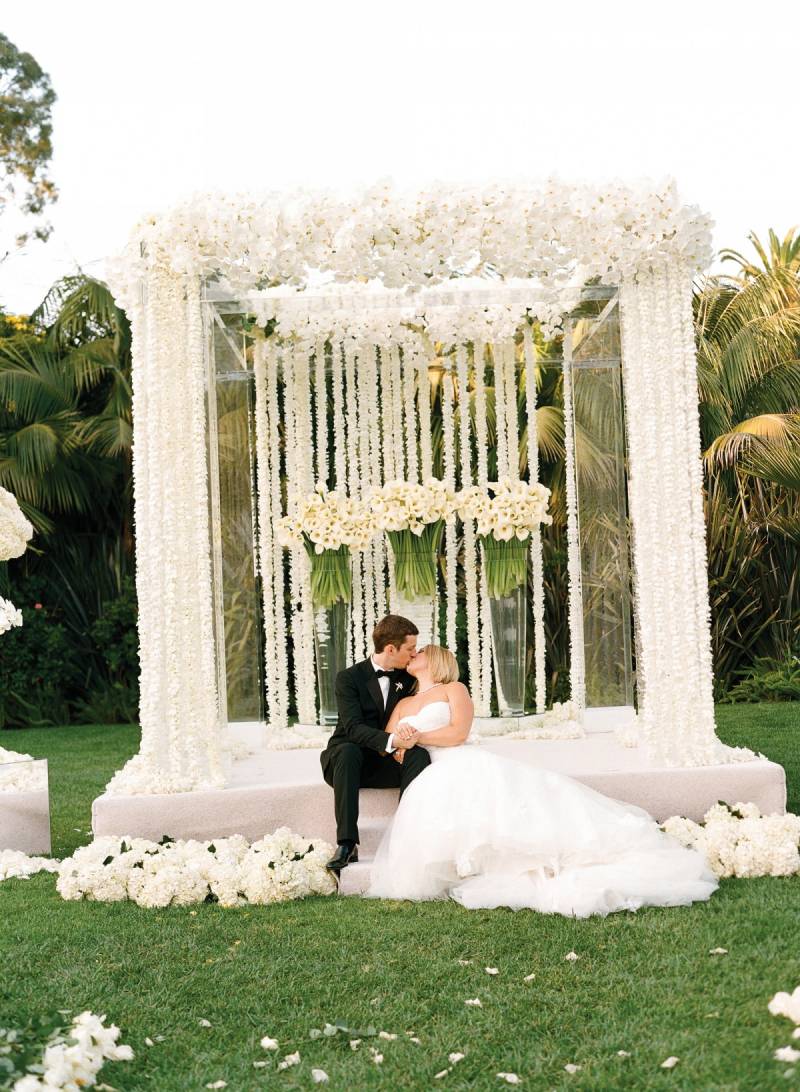 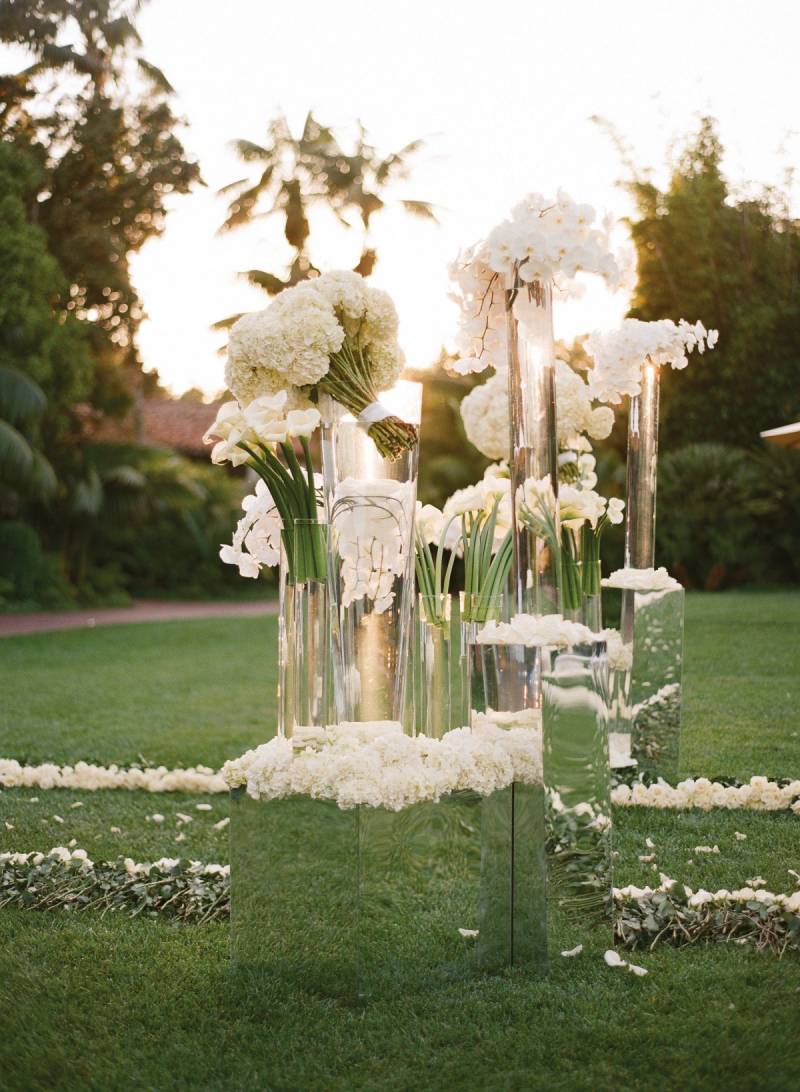 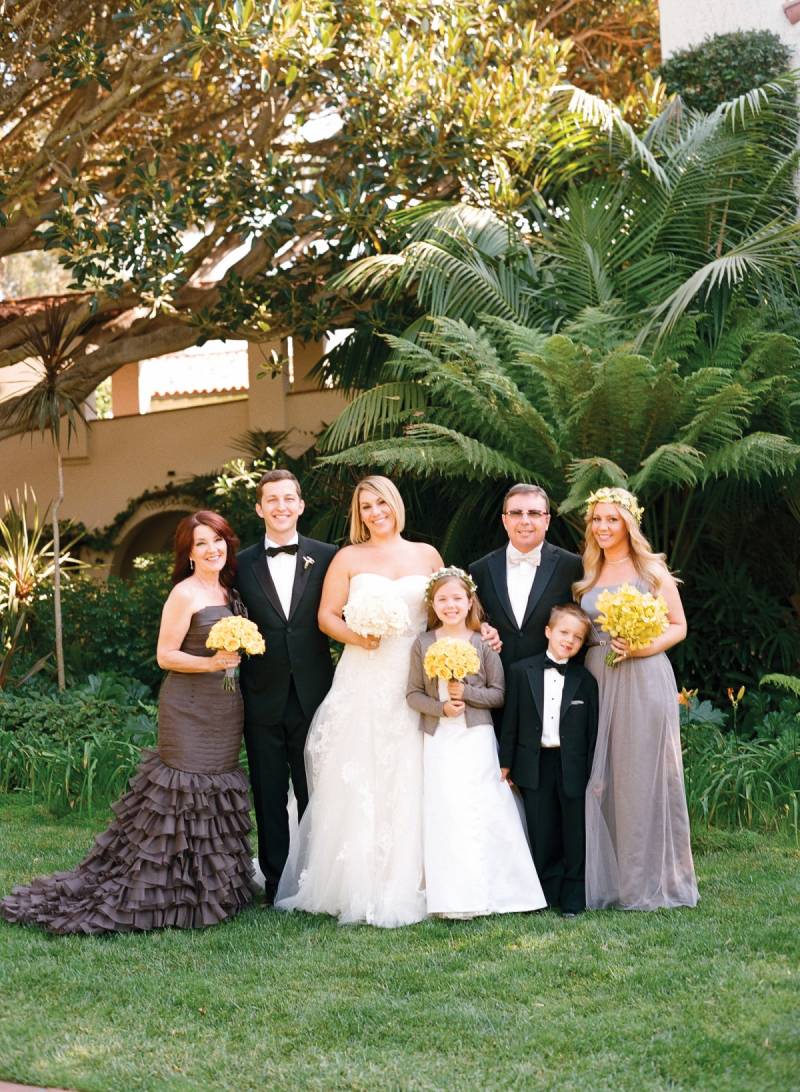 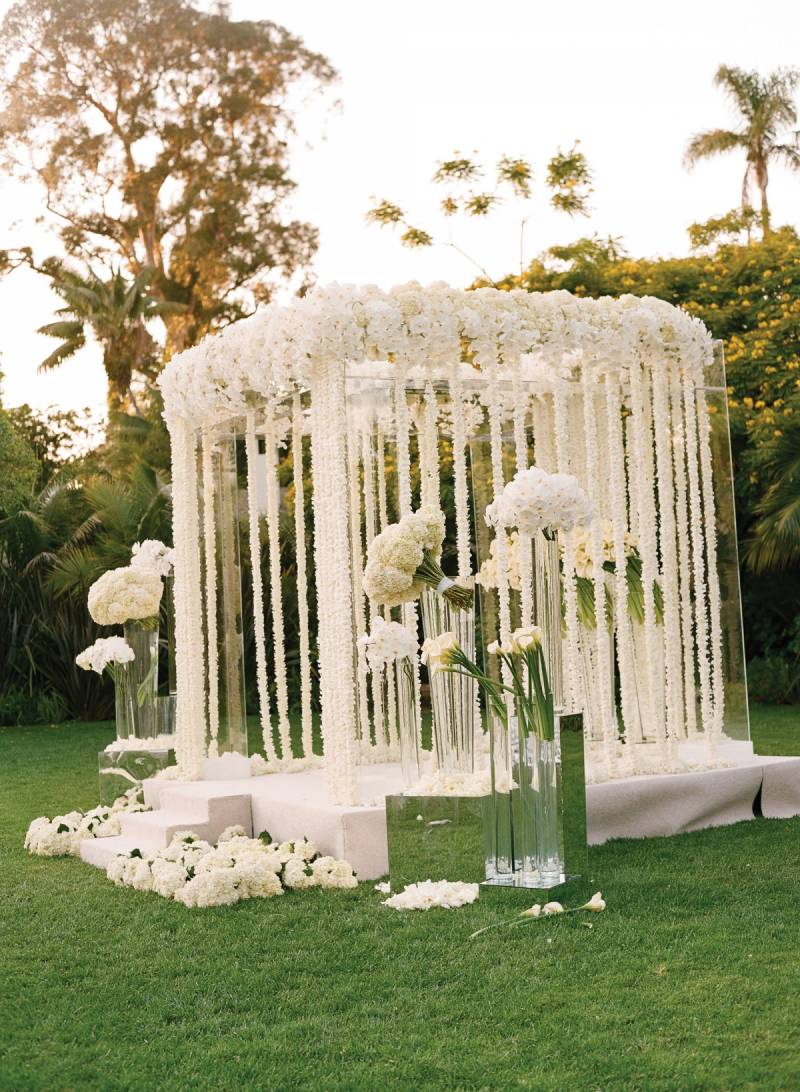 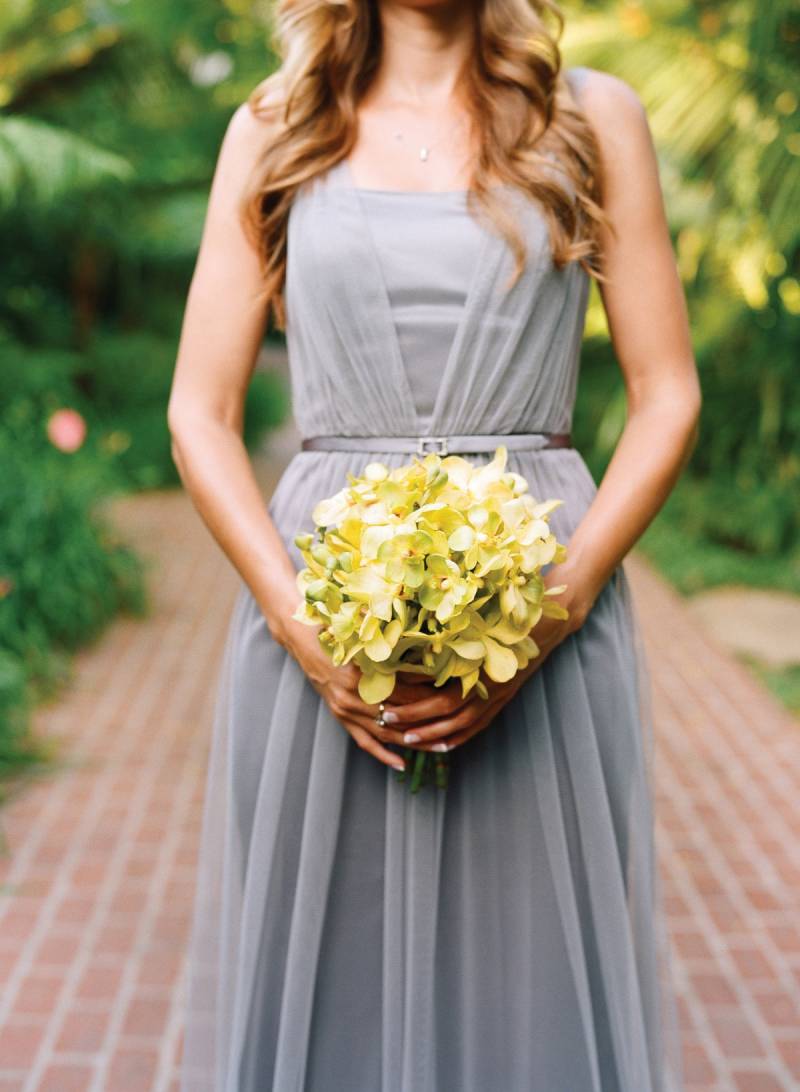 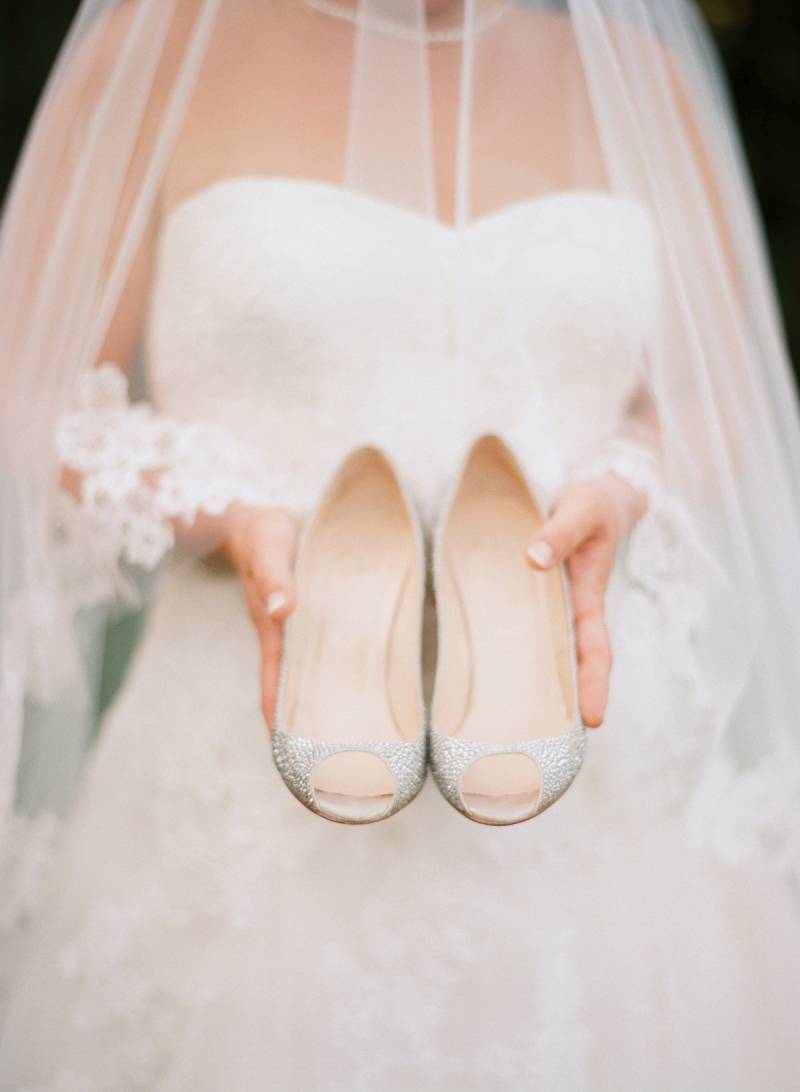 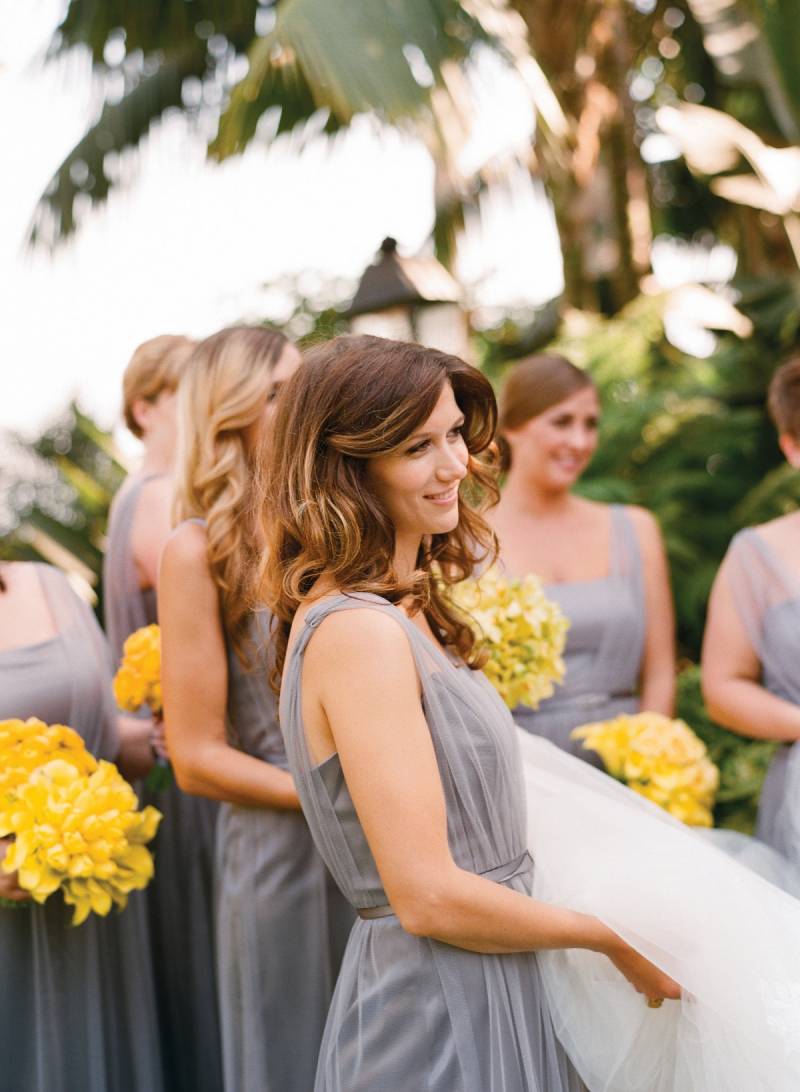 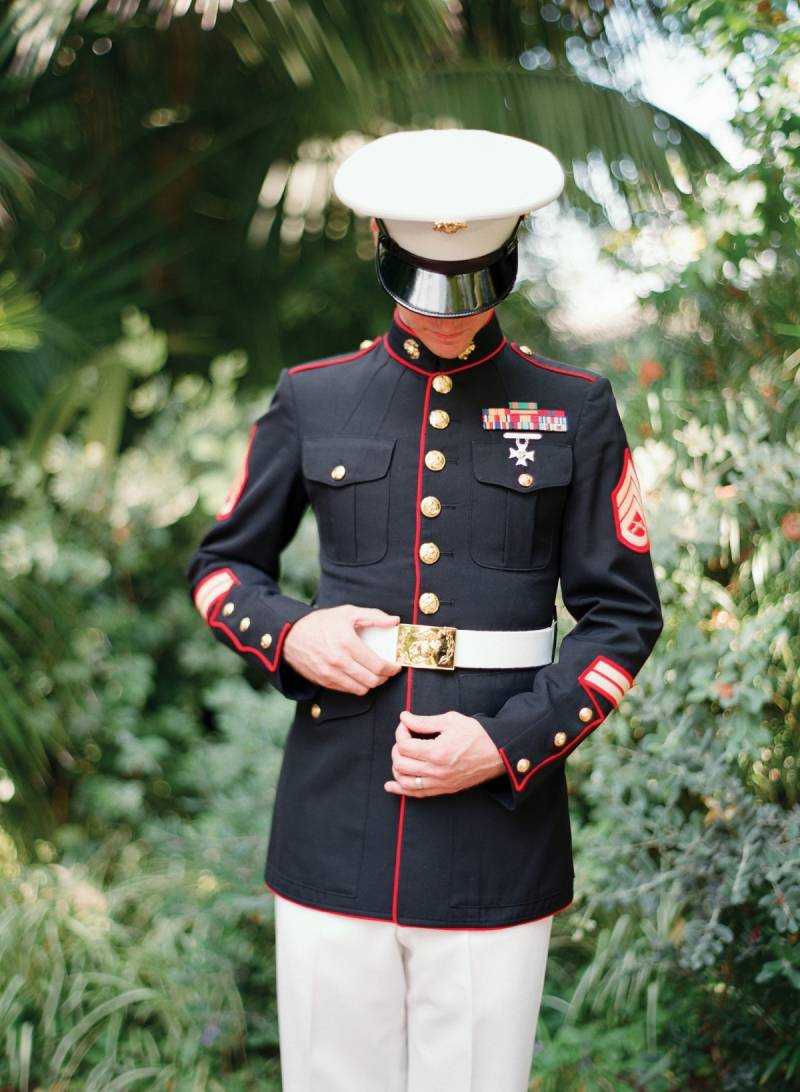 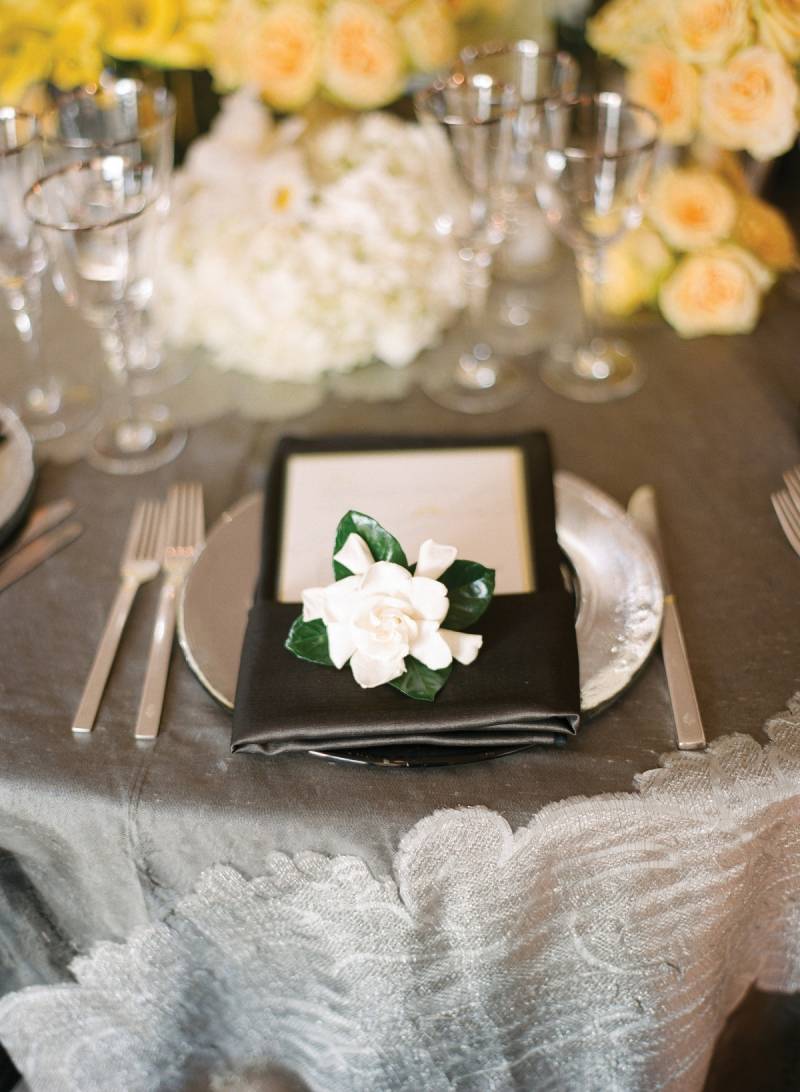 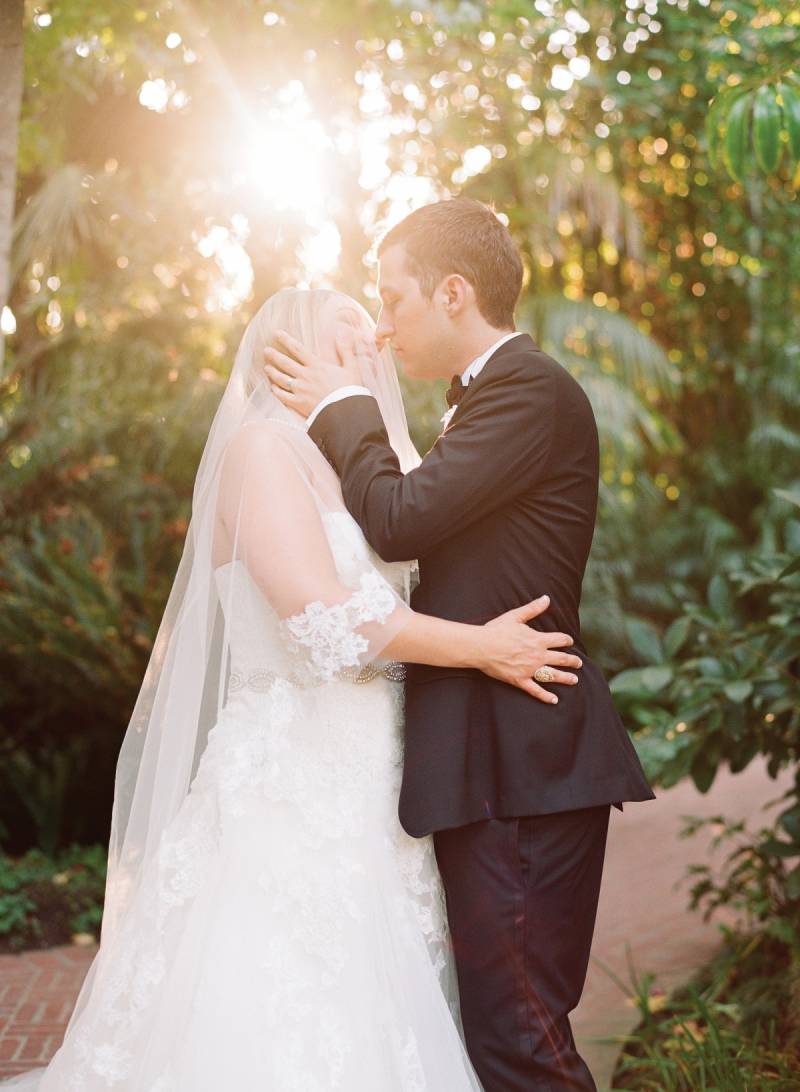 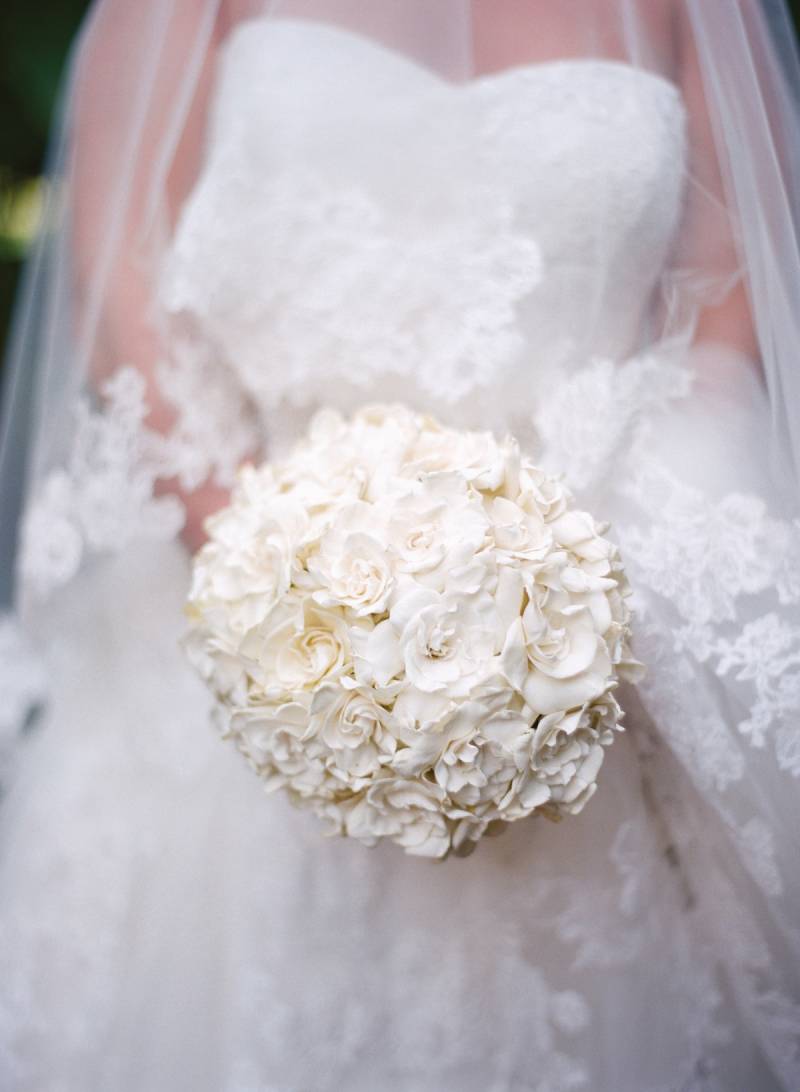 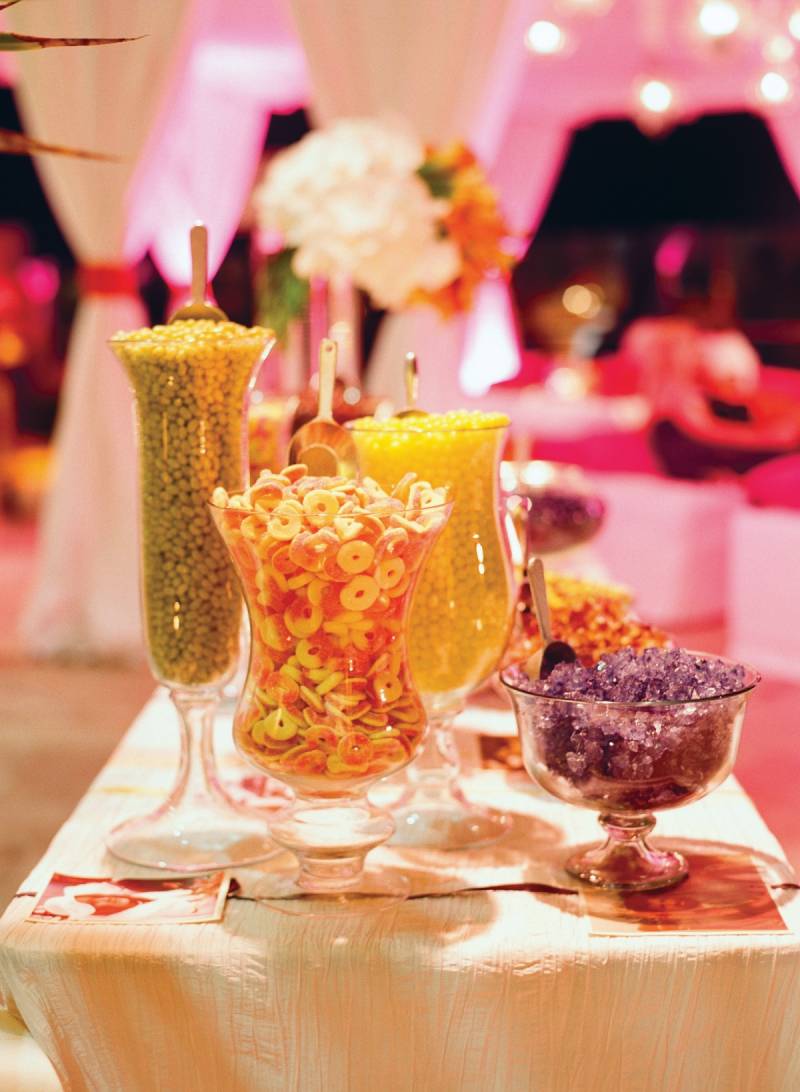 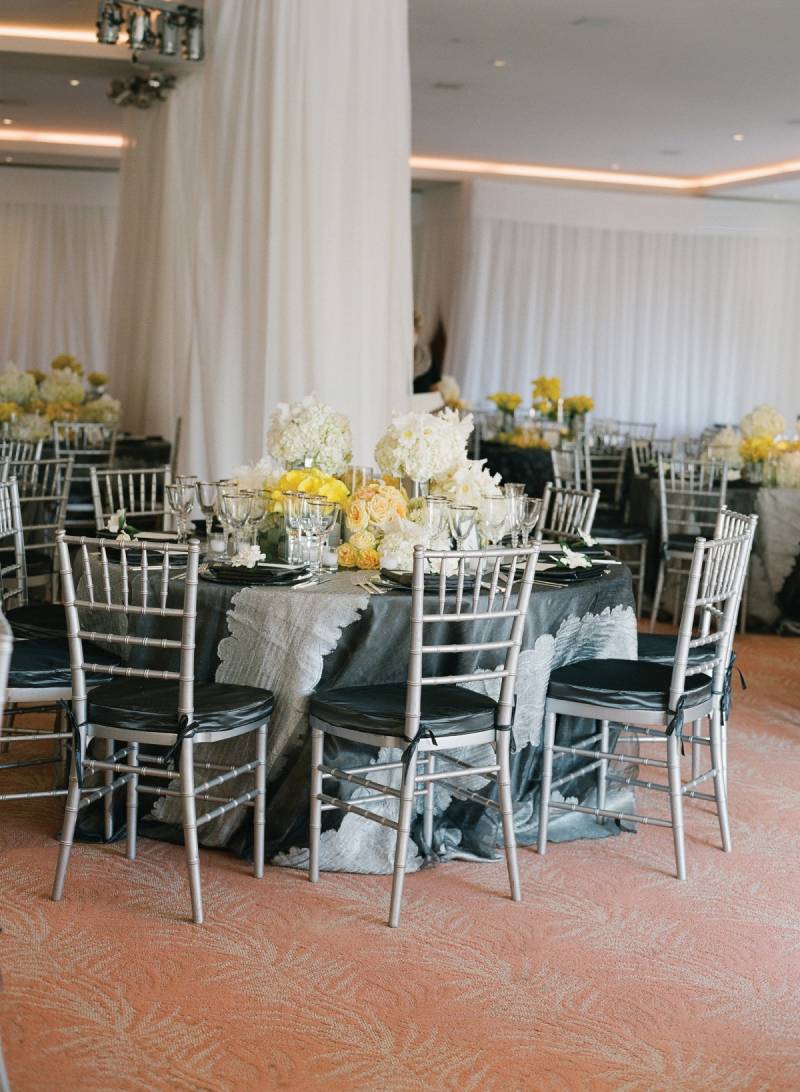 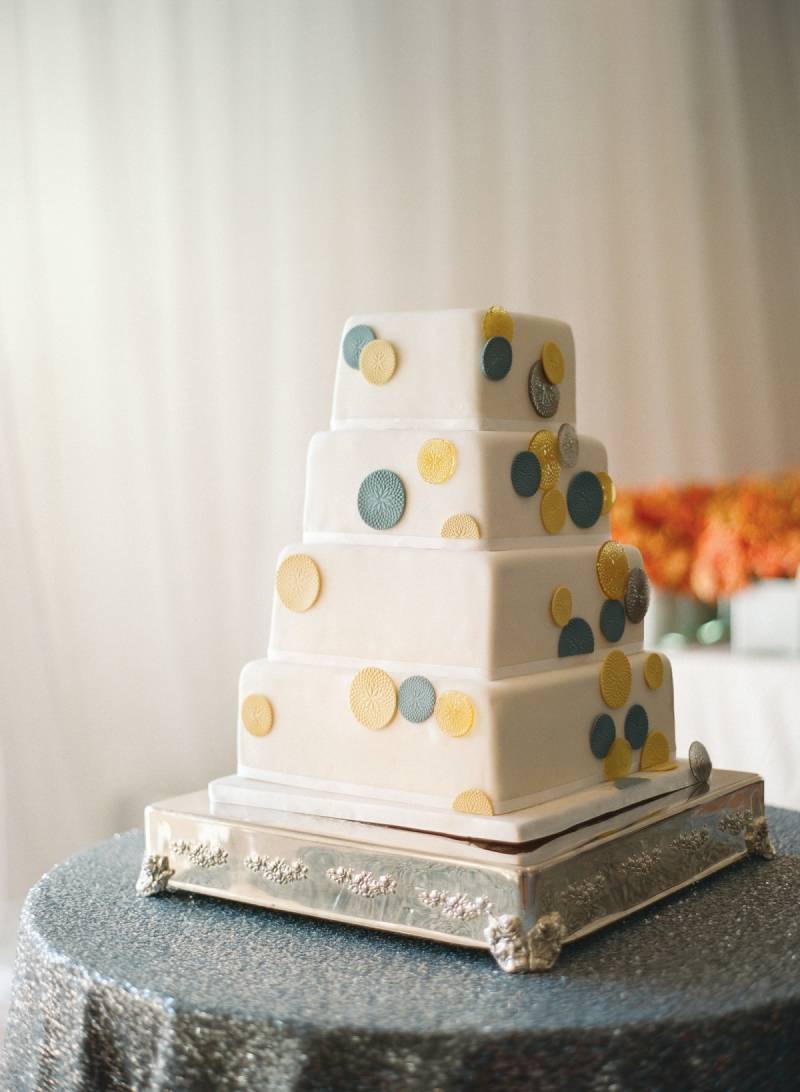 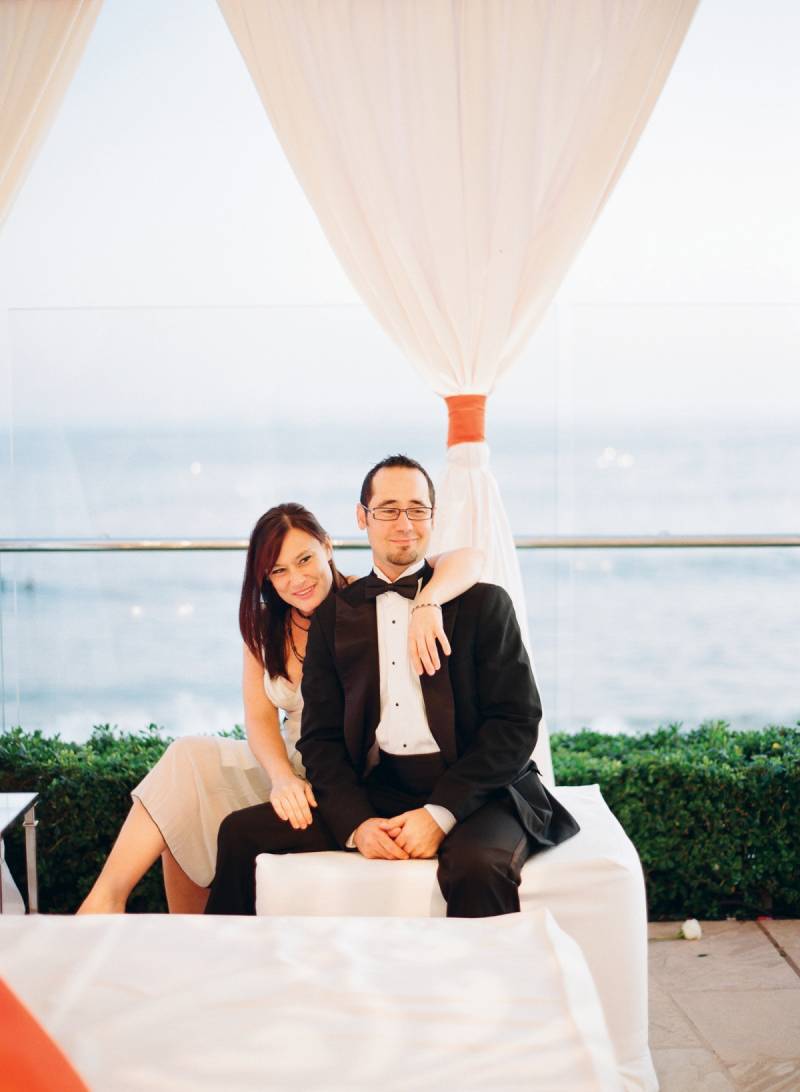 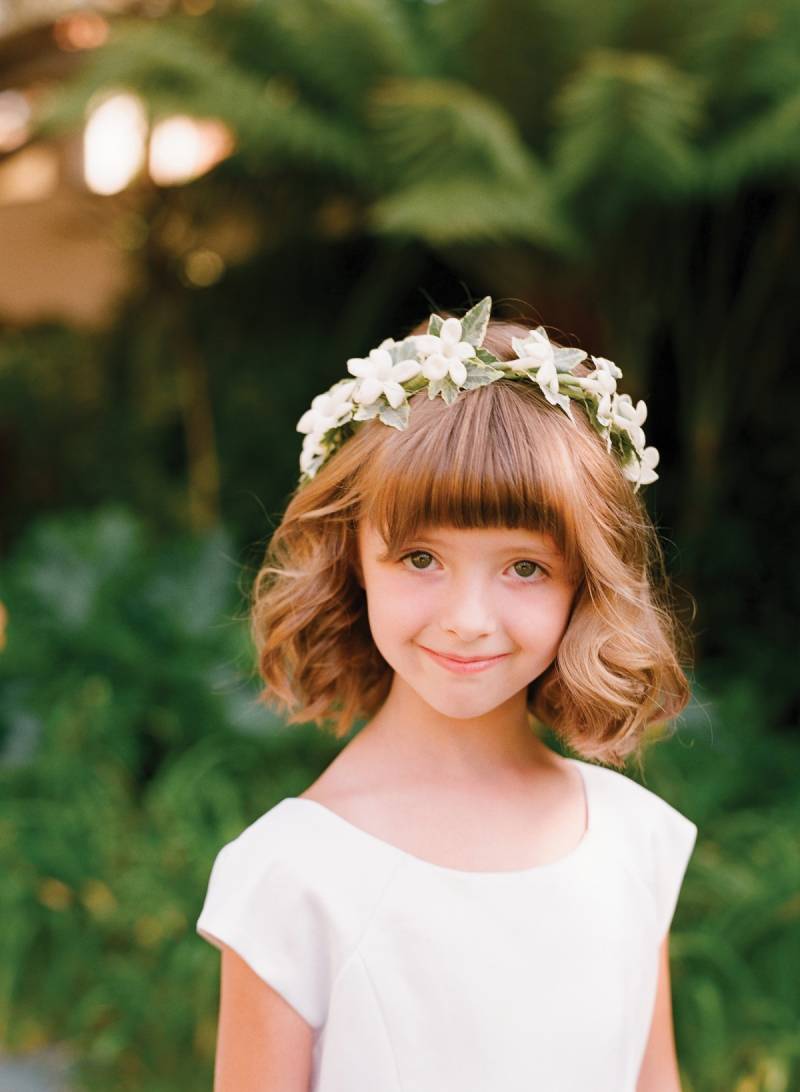 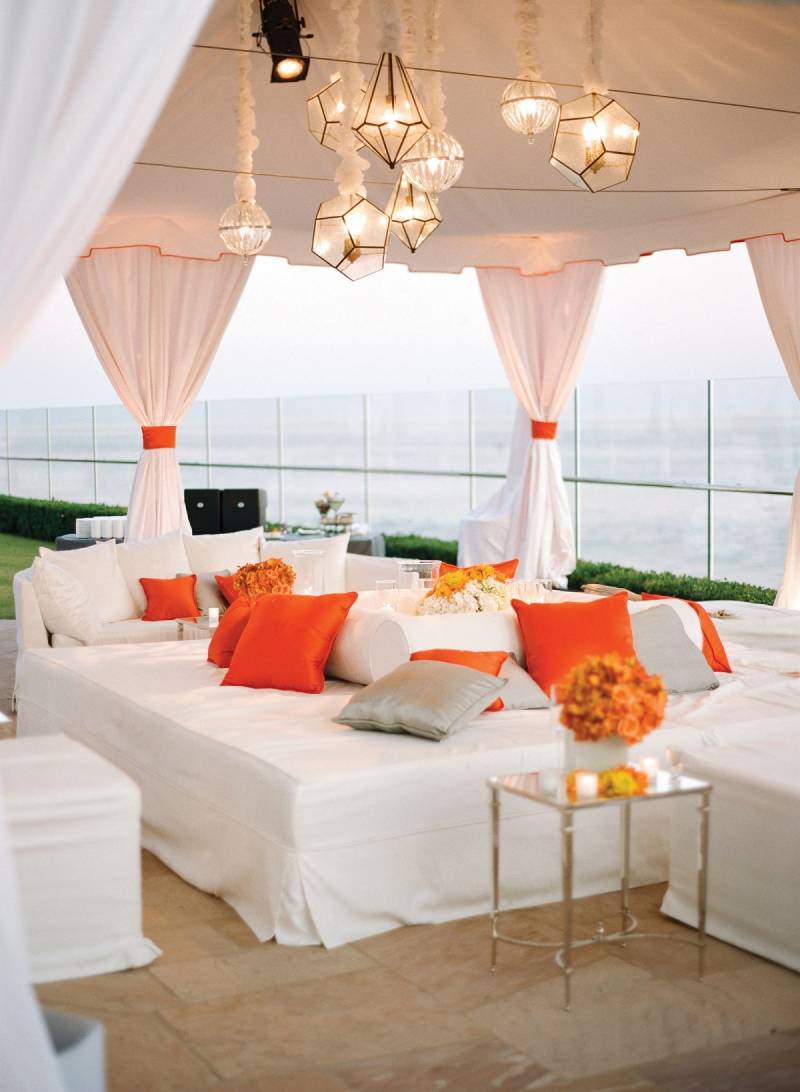 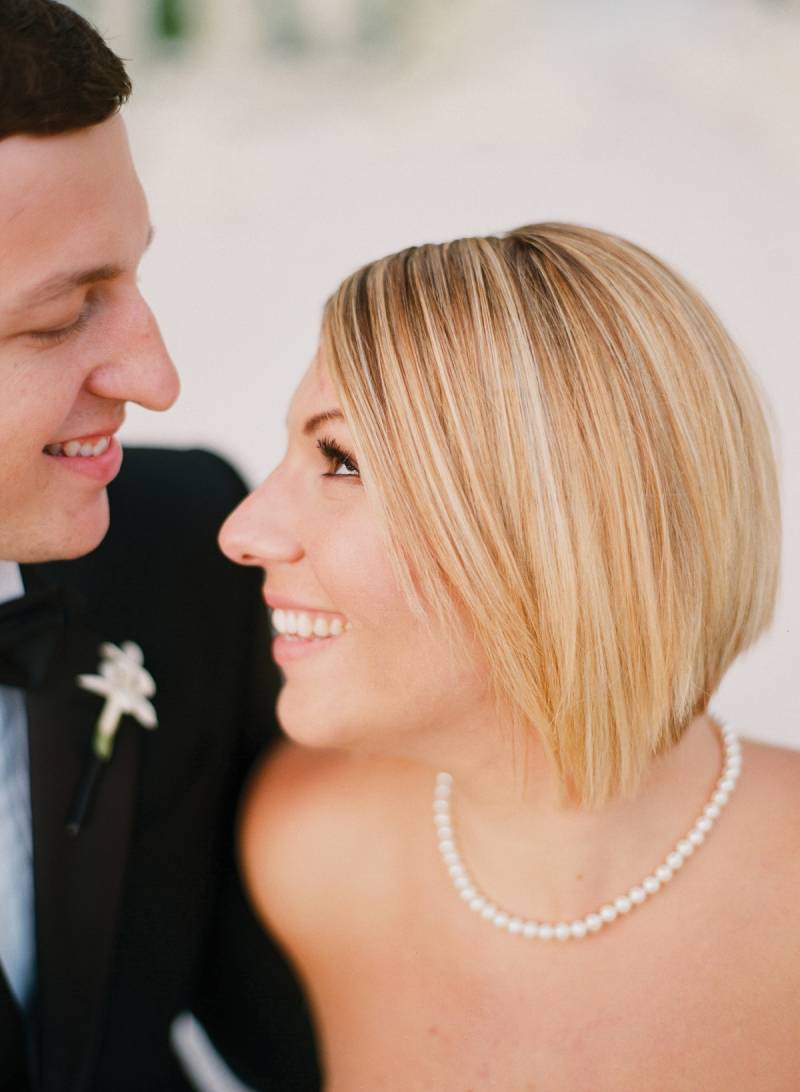 PrevThe Main Act
NextNau Kou Aloha: My Love is Yours