Nau Kou Aloha: My Love is Yours

“Our story is one of love in Hawaii and with Hawaii,” says Tara Davis of her island romance with Kurt Arnold. Nou ko'u aloha which translates as “my love is yours” in Hawaiian is the touching phrase that Tara uses to express her adoration. “This not only rings true for our love for each other, but for our love of Hawaii,” Tara says. There was never any doubt that the sweethearts would wed on the sandy shores of the Four Seasons Resort Hualala'i at historic Ka‘upulehu on the Big Island’s Kona coast. “We wanted our guests to know from the beginning that Hawaii was not just a pretty place to wed, but a place dear to our hearts,” Tara says. The stark beauty of the Big Island’s black lava rock landscape set against delicate white sandy beaches initially drew the couple to their dream locale. But it was “the Hawaiian people, their rich history and the way the island embraced us” that made Kurt and Tara’s destination wedding the ultimate expression of love.

A destination wedding seemed only natural for the couple who share a love of travel and exploration. “Thankfully, we both have very supportive friends and family who encouraged us to plan a wedding in our dream location although it meant they had to travel, too,” Tara says. Even the couple’s minister boarded a flight from Houston to Hawaii to make their sacred union that much more personal and meaningful. Elegant coral letterpress invitations with a wax pineapple seal designed by Laura Hooper Calligraphy announced Kurt and Tara’s “Wedding Paradise in Hawaii”. Each sun-bleached aqua envelope featured a map of the Big Island set atop a Hawaiian quilt patterned fold that was used throughout the wedding décor.

The staff at the Four Seasons Hualala'i planned an entire weekend of island-style celebrations for the out-of-town guests. “The Four Seasons Hualala'i event planners worked tirelessly with us to make sure every aspect of our wedding weekend was personalized,” the bride says. Upon arrival, family and friends were presented with fragrant lei and thoughtful welcome bags including Kona chocolates, vintage Hawaiian postcards, miniature monogrammed bottles of Tabasco sauce and a fabulous itinerary with a corresponding resort map. The festivities kicked off with an aloha cocktail party on the resort’s Beach Tree Lawn lined in tiki torches. The Hualala'i Lava-tini was the signature drink, the groom’s personal favorite from prior stays at the hotel. Guests enjoyed pupus (Hawaiian appetizers) from Keahole lobster corn dogs to pulled pork sliders and spicy huli-huli chicken skewers while a Hawaiian band sounded in the background.

“We wanted Friday night’s rehearsal dinner to be a perfect marriage of Hawaii, Texas and my home state of Louisiana, all of which have a unique beach culture and cuisine,” Tara says. Both Kurt and Tara donned new custom-made cowboy boots from Texas, a special wedding gift to each other. “The detailed, colorful inlays of our boots told our love story and we thought the rehearsal dinner was the perfect night to introduce them to the sand!” she says. The open-air “Big Island Barbecue” featured a Southern-inspired menu: Texas-style barbecue brisket with Rudy’s barbecue sauce and Louisiana jambalaya with Tabasco sauce. At night’s end, celebrants lounged atop blankets in the sand to enjoy a traditional luau show with fire dancers.

On November 20, 2010, guests strolled the tree-lined pathway toward the ceremony site at the Four Season’s Palm Grove. Situated on 800-acres of majestic ocean front, the resort offers one of the most romantic settings in Hawaii, a retreat free of all modern day distractions. In accordance with tradition, the bride and groom opted not to see one another until the ceremony on their wedding day. Tara says, “I remember walking with my dad toward the aisle, blanketed in white orchids, thinking ‘I’m the luckiest girl in the world to marry this man in such a beautiful place’.” The ceremony was marked by a bamboo arch covered with white orchids and lush amaranthus. Early on in the planning process, the bride and groom decided to don glamorous, formal attire despite the casual beach setting. “I think Kurt had as much fun picking out his custom tuxedo as I did my dress,” says the bride. The beautiful blonde wore a Chantilly lace, hand-beaded Badgley Mischka gown with an ornate chapel veil. “I felt like a princess and never regretted my choice to splurge on the dress of a lifetime,” she says. Kurt was a dapper groom in an Ermenegildo Zegna tuxedo with pineapple cuff links, a gift from his bride after winning the Hawaii trial. The bridesmaids wore coral chiffon Amsale dresses, while the groomsmen wore turquoise Carrot & Gibbs bow ties to reflect the azure ocean setting.

Beth Helmstetter of Beth Helmstetter Events and Jennifer Gillis and Kalai Carey at the Four Seasons orchestrated the impeccable design of the day. A wall of flowers, crystals and mirrors displayed a seating chart in gold calligraphy. Florist Holly Flora created a profusion of orchids and peonies arranged in varying crystal and mercury glass vases as centerpieces. Chic floral China, gold-rimmed crystal glasses and letterpress menus sat atop beaded La Tavola linens. The sweetheart table was marked by two seven-foot tall coral and white orchid trees. Guests savored a four-course meal that featured a selection of wines from the couple’s travels to Napa Valley and Italy. Hualala'i's famous lobster bisque, pepper-crusted filet mignon and Pacific Rim short ribs were enjoyed by all. Tara and Kurt took to the dance floor beneath a canopy of string lights for their first dance as man and wife. “It felt like just the two of us in a garden full of flowers taking in all of the events of the day,” the bride says. 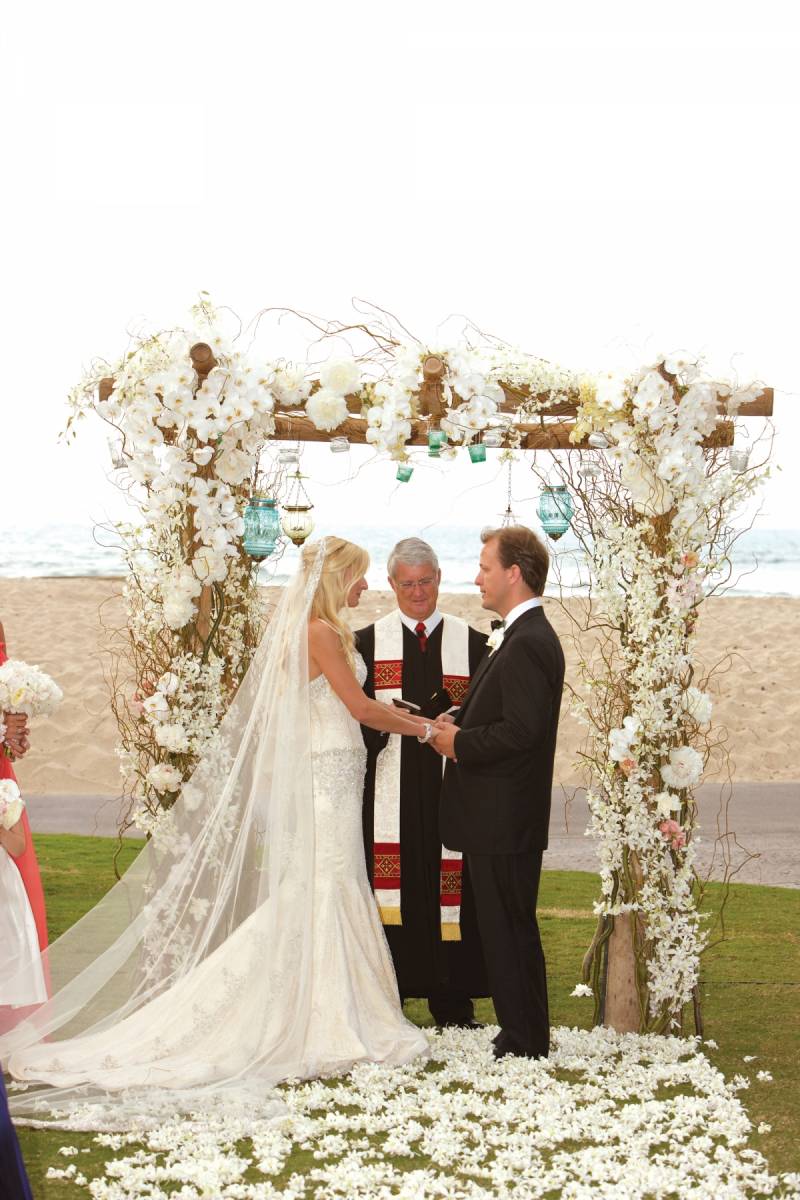 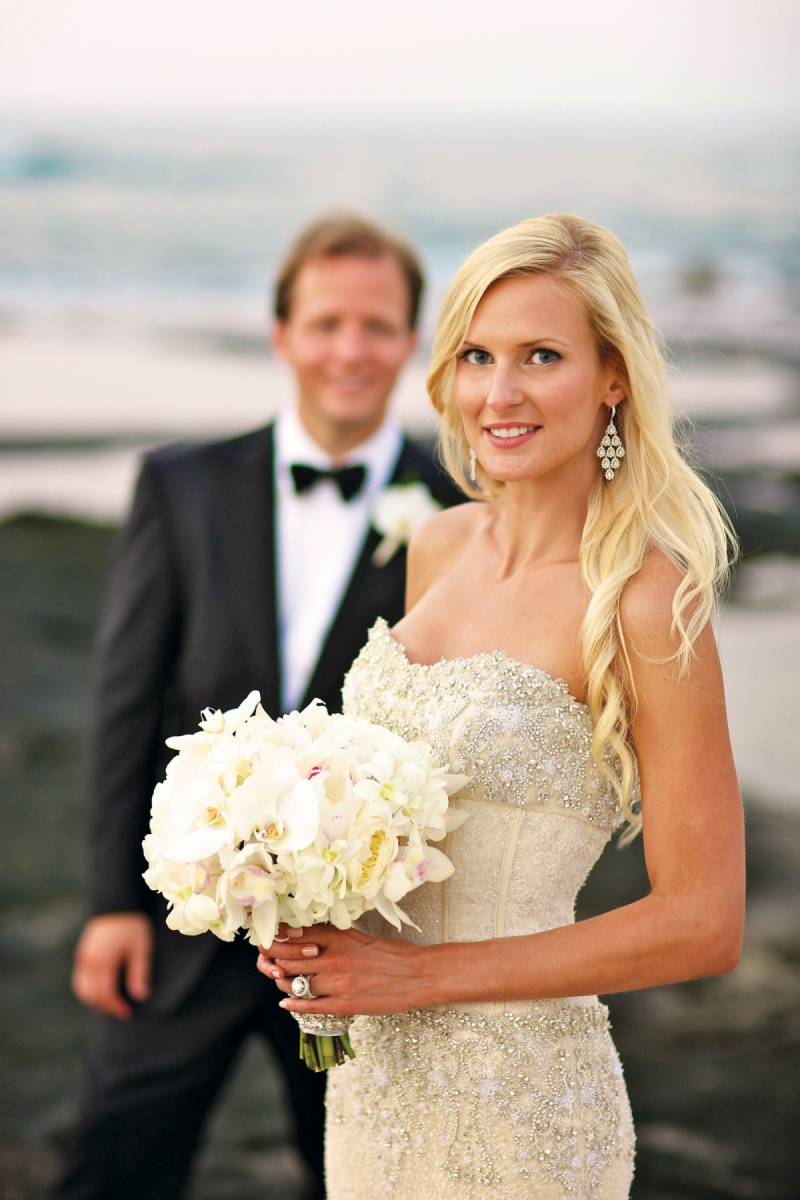 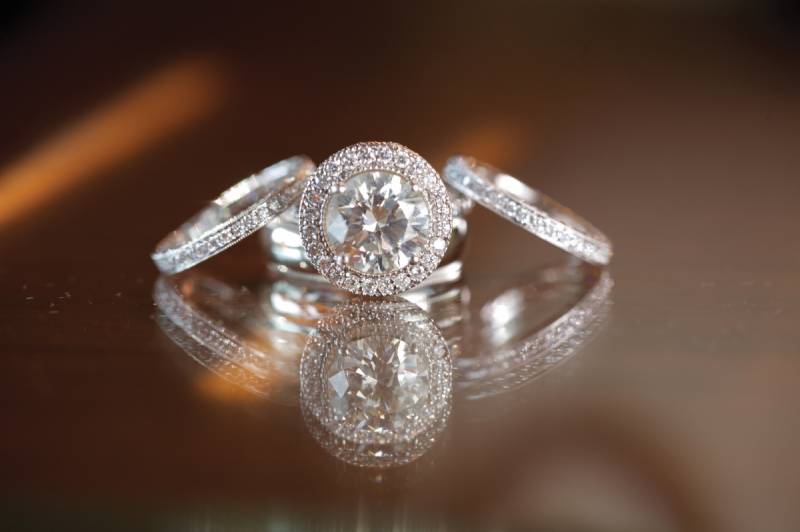 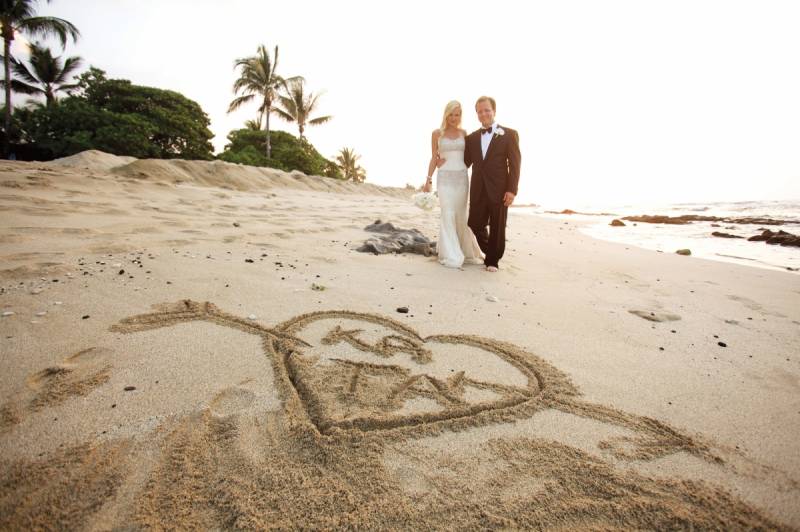 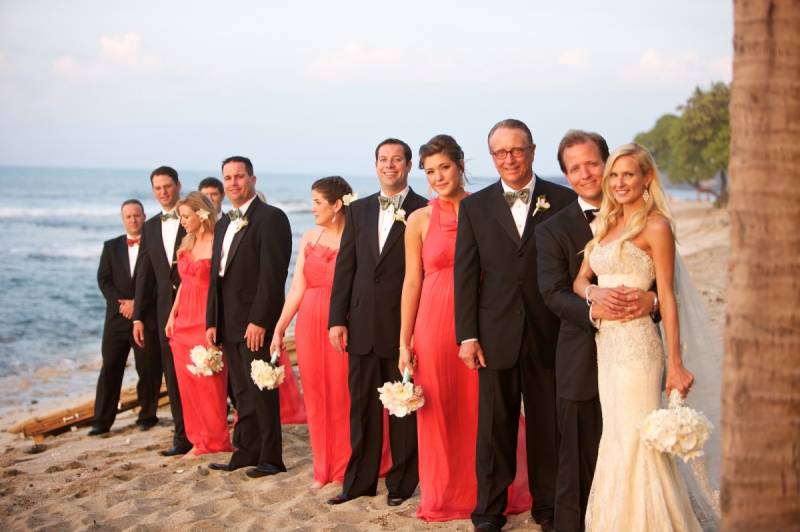 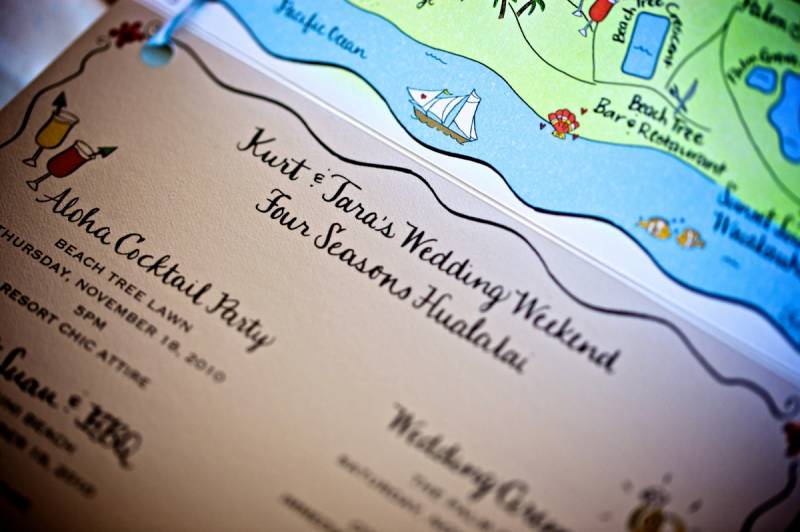 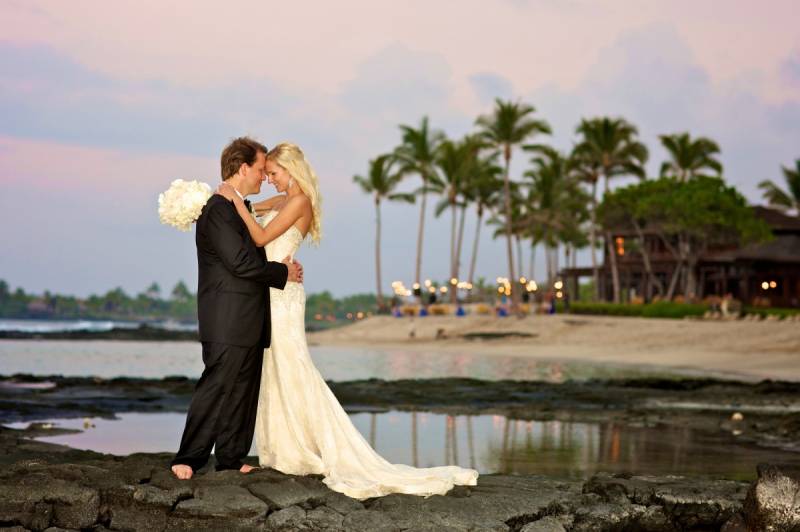 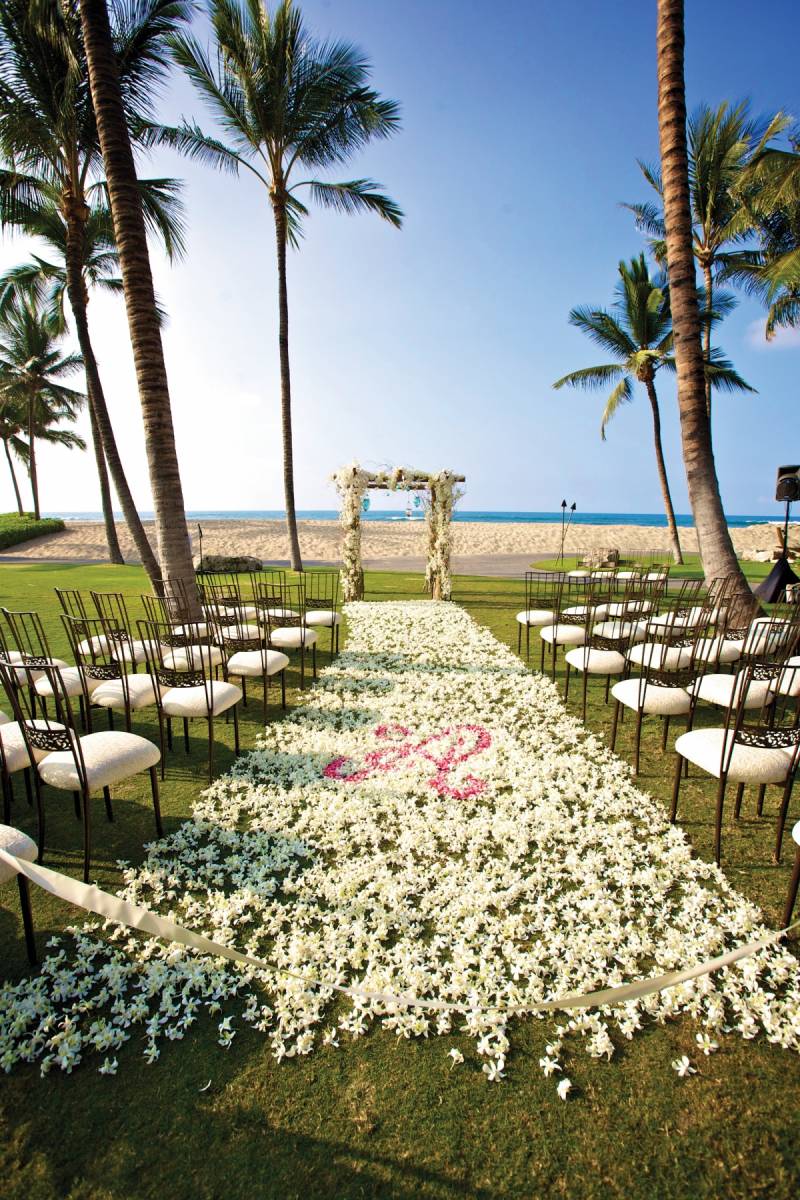 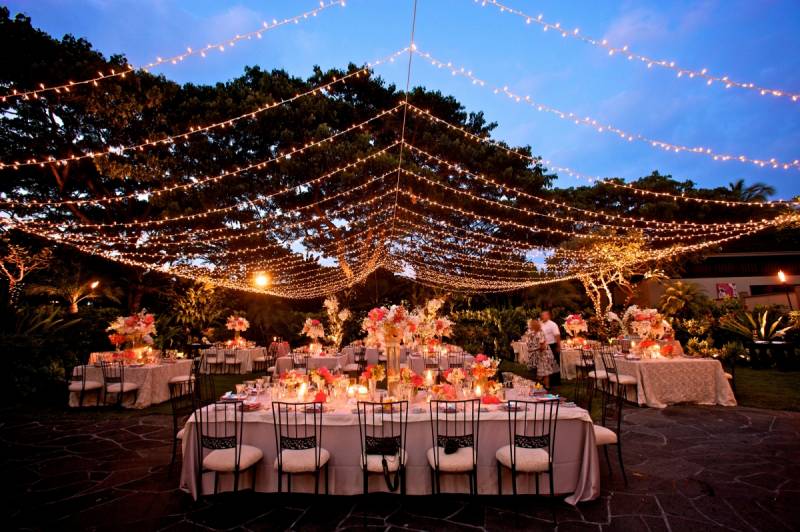 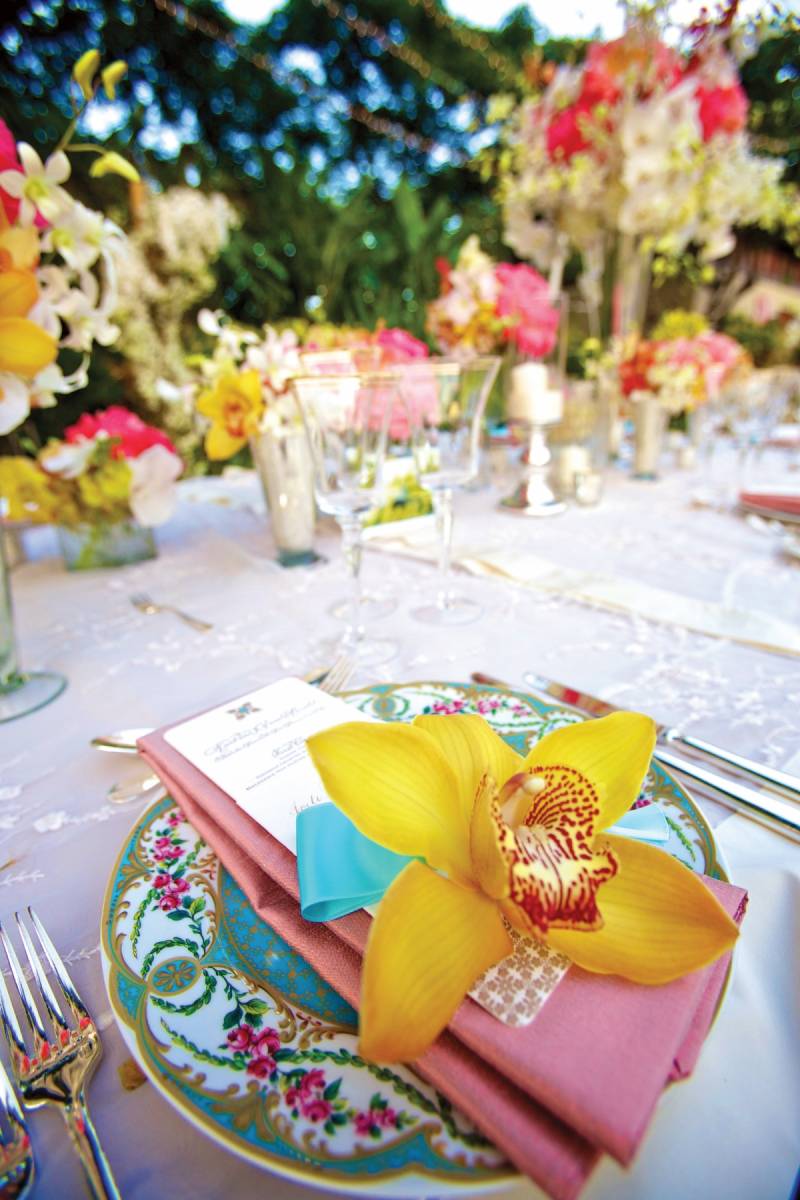 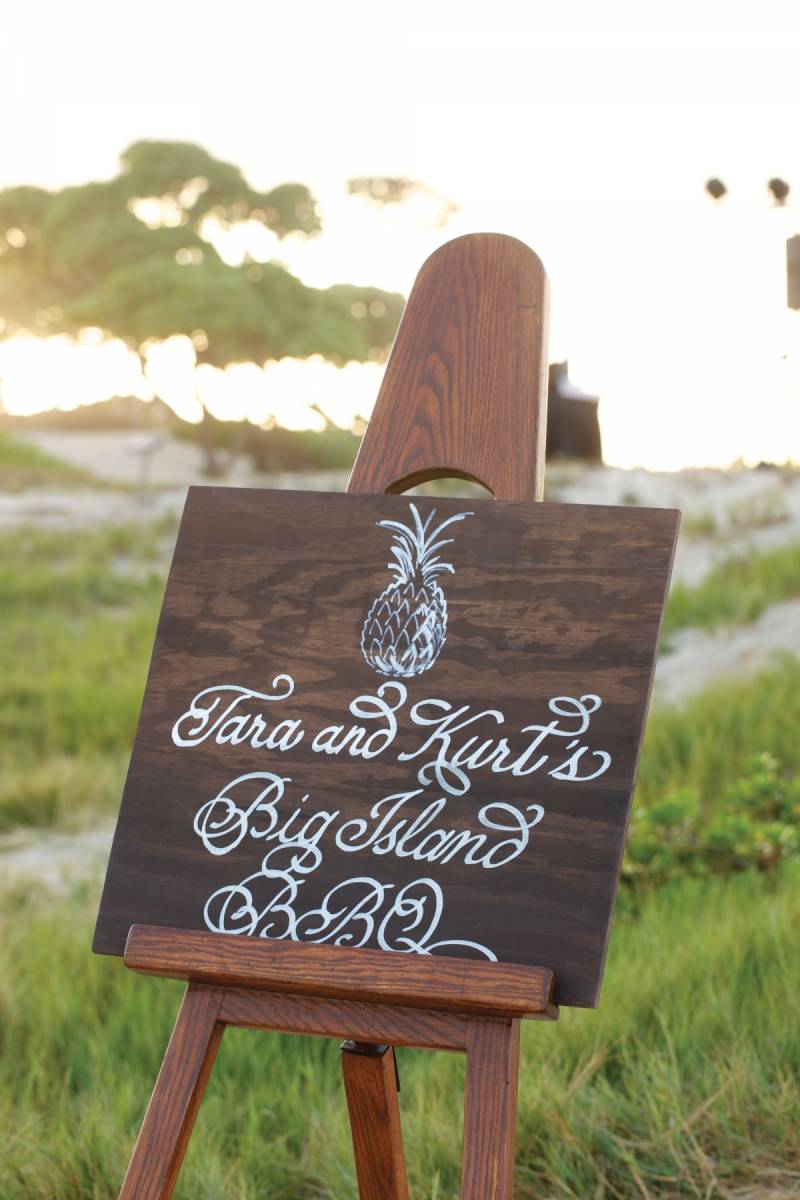 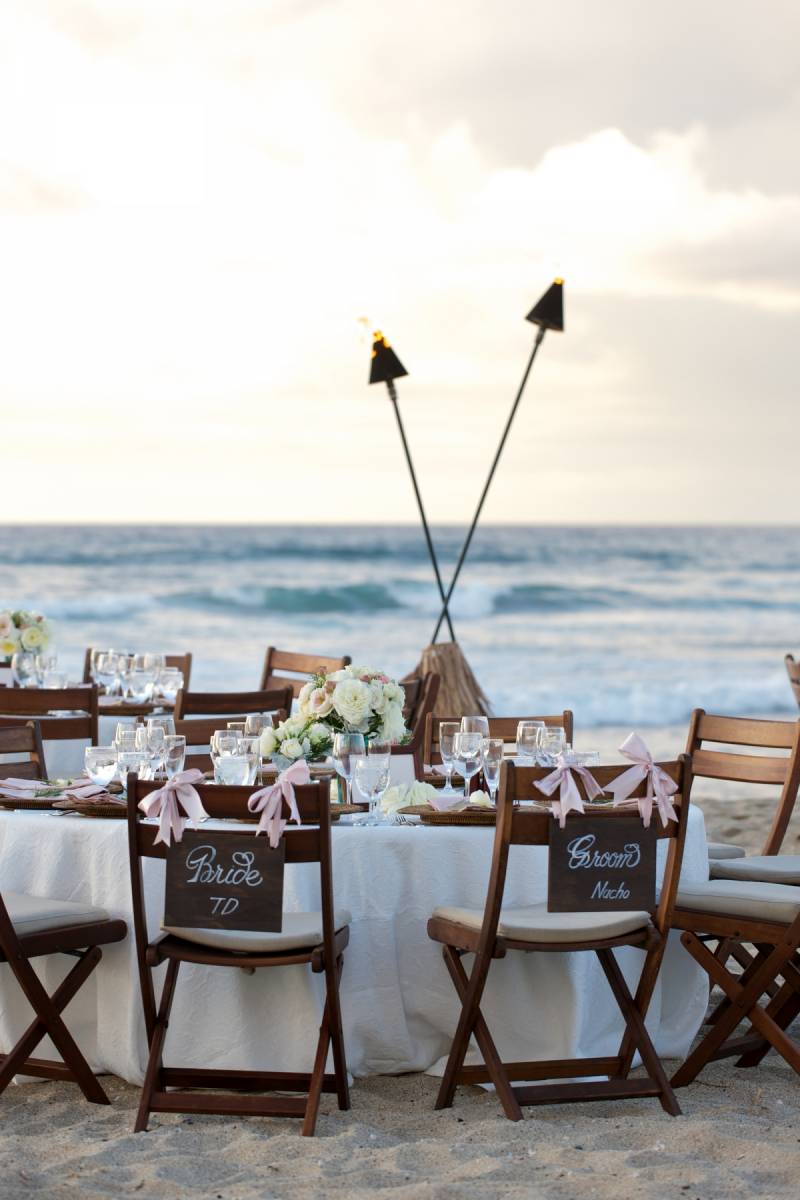 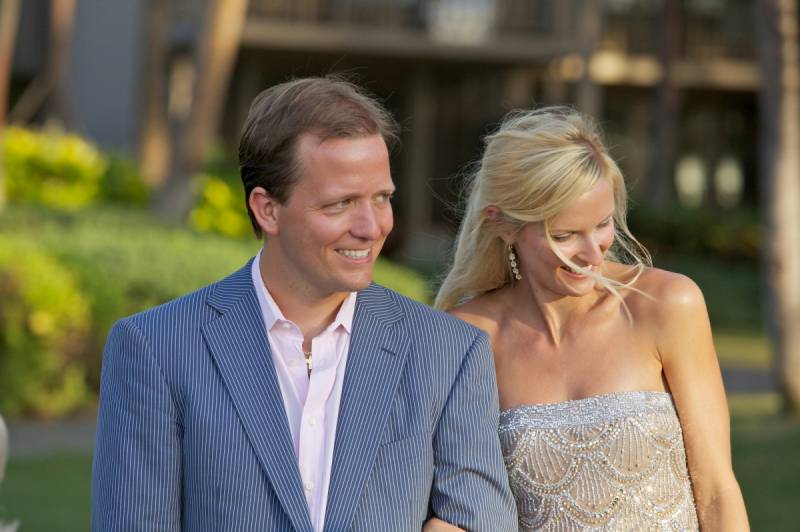 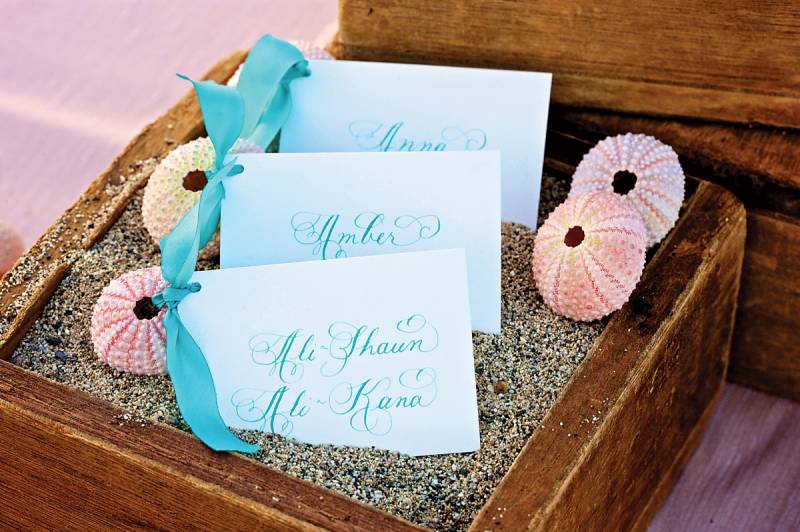 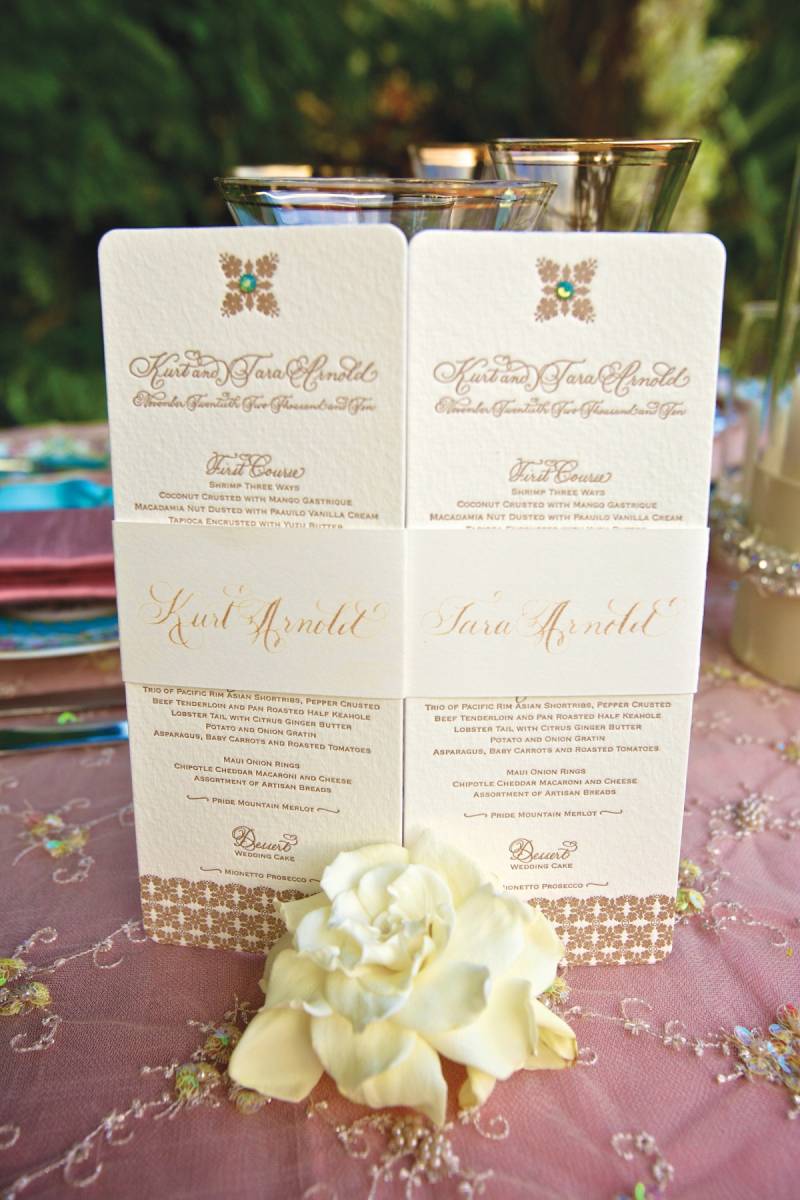 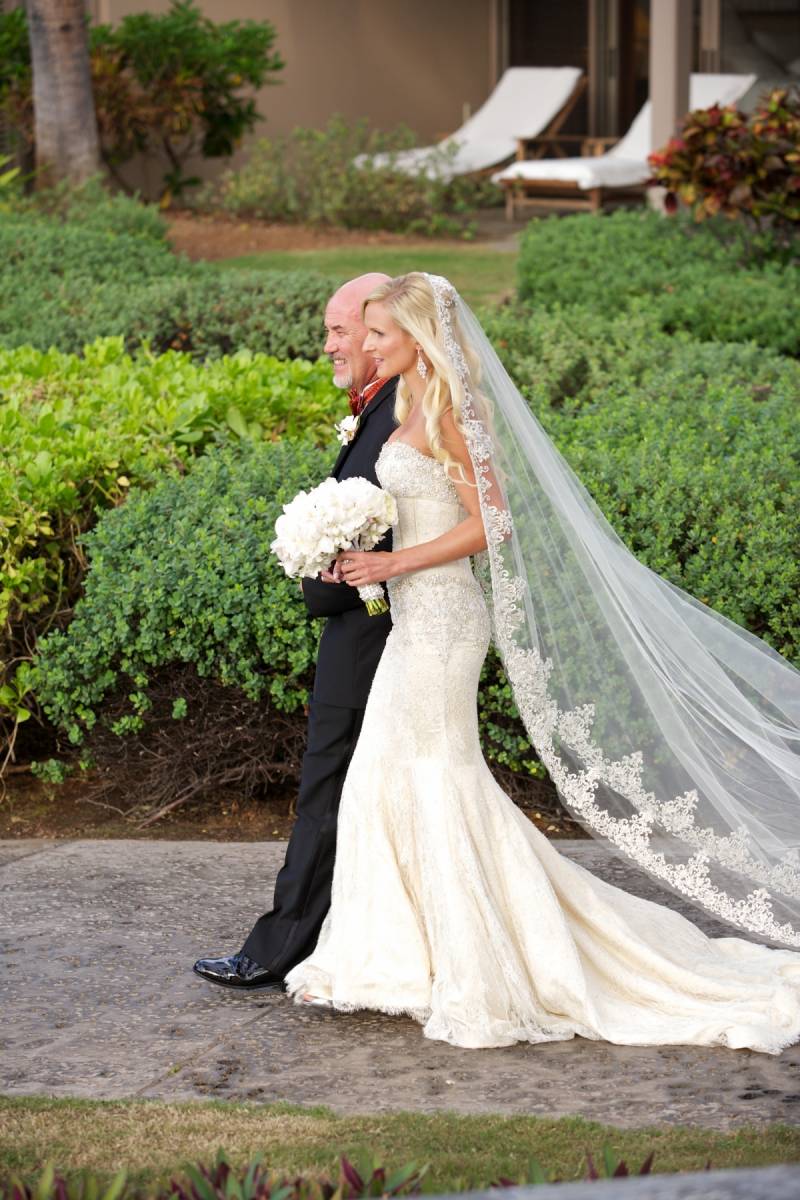 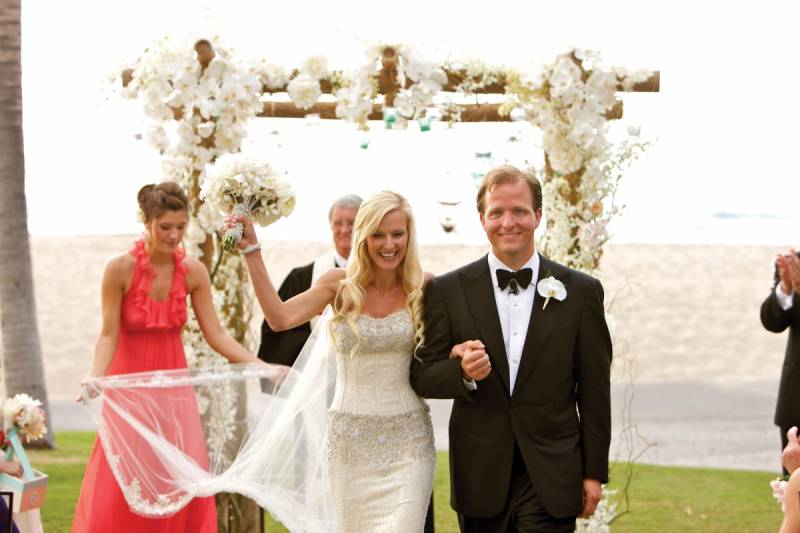 PrevRoyalty for a Day
NextAmerican Riviera